There has been work and much illness in the family, and I just haven’t had time or inclination to do any arts & crafts for some time.  But I made a special effort to make a couple Valentine’s Day cards.

I like Valentine’s Day.  Many people decry it as a manufactured “Hallmark” holiday.  But like anything else, you can make of it what you will.  One day in the year to put forth a little effort in appreciation of your loved ones.  A bunch of flowers, some candy, and a card.  If you like to cook, cook a nice meal for your love.  If you don’t cook, make a reservation at a nice restaurant.  Really, it’s not too much to ask.

My husband has become used to getting his handmade Valentine’s cards.  He was bleating for it on Friday night, but I didn’t give it to him because it was not yet the day.  Here it is:

The shiny panel is a Shimmer Sheet which I ran through the Darice “Ranunculus” embossing folder.  I painted and heat-embossed a chipboard heart to add for some texture.  Husband liked it quite well.

I also made a card for a couple, friends of ours, who got married the day before Valentine’s Day: 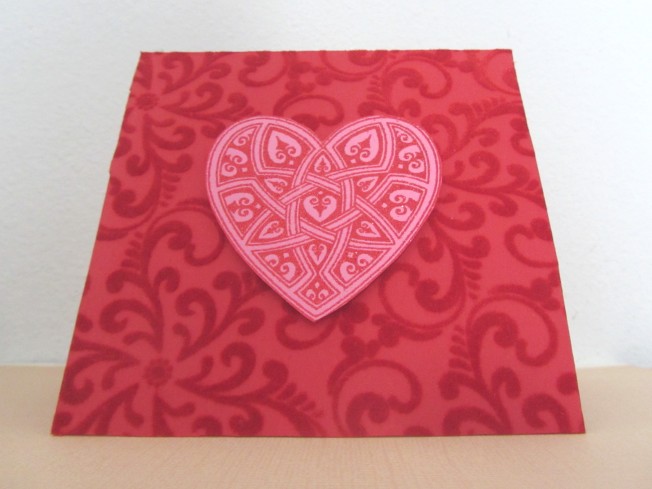 Here I have used some flocked red scrapbook paper, and heat-enbossed a Stampendous stamp called “Gothic Heart” on pink card stock.  Simple to create but quite fancy looking.  I hope they like it.

It’s late, that’s really all I have time for now.  Thanks for looking!

UPDATE: I am submitting the flocked heart card to the Craft Hoarders Anonymous Challenge — they have a Valentine’s challenge that runs through March 8.

I made two Valentine’s Day cards for my husband, and told him he could pick the one he liked best.  He said, “Why do I have to pick one?” So he got two cards for V-day!

He has allowed me to showcase them on my blog — he is proud of my work and likes to show it off. 🙂

Here is the first one:

This card he liked better, even though it is actually less perfect.  I smudged the cardstcok on the back and the inside noticeably when I was sponging on the ink.  And I thought I was being so careful!

But the sentiment on this one is more sentimental, so that’s why hubby liked it better.  If you can’t read it, it says, “You are the one.”

That sentiment epoxy sticker is from K & Company, and I designed the whole card around it.  When I saw it in my stash, I thought, I have stamps that look like that.  And those colors look like Distress Ink colors.

So, I sponged the card with Faded Jeans Distress Ink. The flowers and dragonfly are stamped in a mixture of faded Jeans and Dusty Concord — some are just one, some are just the other, and some have a mixture of both inks on the stamp.  The stamps are the Inkadinkado Meadow Flowers clear set ( I think that’s what it’s called, I can’t seem to find it right now!), an Agapanthus stamp and a Silhouette Wildflowers (?) stamp from Hero Arts.  I don’t know who made the dragonfly stamp, I’ve had it so long.

I dabbled a few dots of Glossy Accents on the back of the epoxy sticker, as in my experience those things don’t adhere very well.  Inside the card is a sticker from the same sheet that says, “Forever.”  I was able to position that sticker to cover up some of the smudges!

Here is the second card:

You can’t really see it in the picture, but that stamp is heat-embossed with three different types of red embossing powder — Recollections Ruby Opaque and Ruby Tinsel, and Stampendous Red Dragon, which is a red-gold mix.  It is quite glittery IRL!

This stamp set is called Filigree, from Mama Elephant. I fell in love with it the first time I saw it in a video on Jennifer McGuire’s blog. (Of course, I fall in love with half the stamp sets I see, so that’s no big thing.)  The tiny heart in the middle is colored in with my red Spica glitter pen. I wanted to add a red heart gem on top of the sentiment there, but the one I had was just a little too big, it overpowered the word Hi.  So I made do.

The hubster found the “Hi” sentiment insufficiently romantic, so in spite of all the glitter, he liked the other card better. 🙂  I’m touched.

He kept them both, though.  They are propped up on his bookshelf in his office.

I updated the stash again!  Something I had completely forgotten I had:

Not sure what I’m going to do with those.

I am working on another Dazzles project. Should have pictures in a day or two. I also made two Valentine’s cards for my husband, and let him pick which one he liked better. I was a little surprised when he picked the more imperfect, but more sentimental one.  The other one was prettier, but he found the sentiment impersonal.  I used my stash for both!  If he lets me, I’ll upload pictures of them tomorrow.

Hope everyone had a Happy Valentine’s Day!